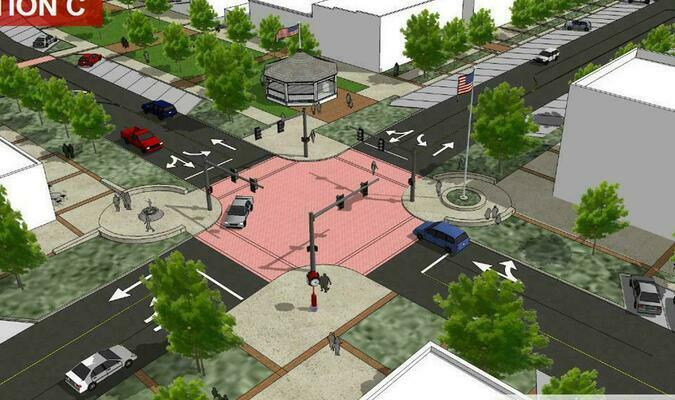 After flying drones downtown, Hanna Engineering continues the design phase for the Downtown Streetscape Project. The environmental and regulatory requirements wrapped up in May, so the firm has been collecting photographs and surveying the area. President of Hanna Engineering Michael Hanna said he expects to present the preliminary plans to City Council later this summer.

“Downtowns are the heart of every city, and Darlington is no different,” says Mayor Curtis Boyd.

The Public Square sits at the crossroads of town – the commercial, historical, political, and geographic heart of the City, and improving the conditions in this area will radiate throughout Darlington, he says.

In the last decade, the City has used infrastructure projects such as the sewer line extension on the Bypass and sewer pump restoration projects for economic development.

Now it’s downtown’s turn to get a facelift through this streetscape project.

“Downtown highlights the character of our City, and research has shown downtowns are a prime economic indicator for the health of their respective cities,” Boyd says. “These improvements are a natural extension of all the growth and investment and will attract new businesses to vacant properties in the area and new customers to existing businesses.”

The City of Darlington was awarded the $750,000 Community Development Block Grant for the project in November. Darlington County Council approved providing the $75,000 required match, and those funds will go towards the Carnegie Library parking lot and façade elements on the buildings that will be much more prominent as they face the new courthouse. City Manager John S. Payne signed the final contract in May.

The added pavement on parking lots, seating, landscaping, sidewalks, and public gathering spaces highlights the commercial activity downtown and create spaces where people want to visit and do business and encourages growth in the town's center.

All work is scheduled to be complete by November 2023.

The first major restoration of downtown streetscape occurred in the 1990s when the City worked with the DDRA to get the parking lots paved and the utilities put underground. In 2005-2009, the City has a large scale public-private partnership project that saved 25 percent of the historic downtown from condemnation and created retail spaces and apartments. In 2015-2016, the City developed a beautification plan for downtown to update signage and landscaping, which will be referenced for design elements in all aspects of this project.