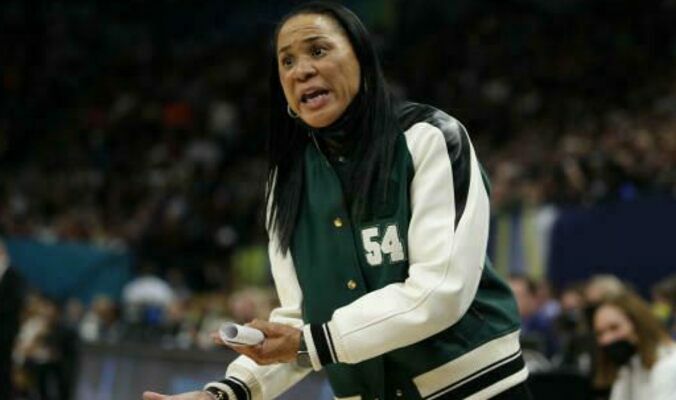 Dawn Staley and the South Carolina women's basketball team won't play BYU this year or next.

“As a head coach, my job is to do what’s best for my players and staff," Staley said in a statement Friday night. "The incident at BYU has led me to reevaluate our home-and-home, and I don’t feel that this is the right time for us to engage in this series.”

The Gamecocks were scheduled to open the 2022 season at home against BYU on Nov. 7 and then travel to BYU next season.

Rachel Richardson, the sophomore outside hitter for the Blue Devils, alleged that she and her Black teammates were heckled throughout the team's match at BYU and that officials, coaches and authorities took too long to respond to their claims. BYU eventually identified and banned the fan – who it said wasn't a student – it claimed shouted the slurs at Richardson and her teammates, but police later said that fan wasn't the heckler.

In any event, Staley didn't believe it would be smart to play BYU so soon after the incident and especially didn't want to travel to Utah in 2023. South Carolina athletic director Ray Tanner also said in a statement that he supported Staley and her staff's decision.

The BYU women's basketball team tweeted after the announcement that the team was "extremely disappointed" in South Carolina's decision and asked, "for patience with the ongoing investigation."

"We believe the solution is to work together to root out racism and not to separate from one another," the team added in the tweet.

Staley and the Gamecocks are coming off their second championship since 2017 after beating UConn, 64-49. She's 366–105 since becoming the head coach in 2008 with 10 consecutive NCAA tournament appearances.