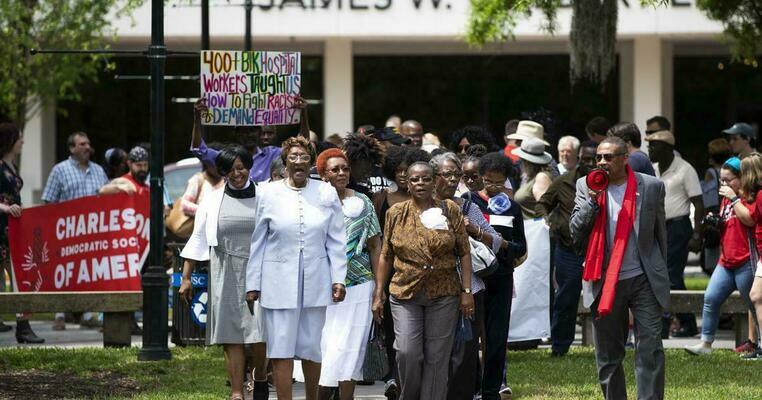 CHARLESTON, S.C. - On May 1, 2022, Ms. Louise Brown celebrated her 87 birthday. It was an opportunity to recognize some forgotten, unsung heroes who refused to surrender to suffering and the evils of racism. These heroes insisted that all work has dignity, all people have worth, that freedom is worth fighting for and we cannot rest until it comes. During the celebration Ms. Brown shared her memories of the 1969 Charleston Hospital Strike when 12 MUSC health care workers were fired during their attempts to stand up for patient safety and better pay and treatment as employees.

In 1968 Racial discrimination kept all but a few African American hospital workers in low-paying jobs as nurse’s aides, housekeepers, cooks, and other non-professional positions. After African American workers were denied access to patient records, they concluded that they were unable to provide appropriate patient care without access to the charts, and walked off their jobs in protest. Hospital administrators fired the aides a short time later for insubordination. However, African American community leaders later persuaded Medical College officials to rehire them. Black workers also complained of being subjected to derogatory name-calling and harassment by supervisors, nursing students, and patients and they were forbidden to leave their floor while on the clock. They were excluded from break lounges and forced to eat their lunches in the bathroom or boiler room. By the late 1960s, these employees increasingly despaired that the civil rights activism which had forced Charleston’s public schools and white-owned businesses to begin dismantling Jim Crow segregation and racial inequalities in the early 1960s would never reach them at the Medical College Hospital.

Brushing aside worker concerns, hospital officials boasted to the local media about the steps they had taken to modernize the Deep South’s oldest medical school and teaching hospital. They also secured major research support to launch an ambitious expansion program with federal assistance. By 1968, a newly hired administrator, John Wise, began to centralize the hiring process and implement the first hospital-wide personnel policies. Hospital officials demonstrated little consideration for the worker unrest that would soon erupt into one of the most significant civil rights protests to take place in South Carolina.

The workers attempted to form a union, Local 1199B, but Governor Robert McNair declared that the state’s right-to-work law precluded union recognition of MCH workers. MCH workers went on strike, a short while later CCH workers also went on strike. Twelve workers were soon fired. As arrests for violation of the injunction increased, Dr. Ralph David Abernathy of the Southern Christian Leadership Conference (SCLC) arrived in Charleston days later and spoke to 1,500 strikers and their supporters. SCLC, still recovering from the assassination of its first leader, Dr. Martin Luther King, Jr., in Memphis a year earlier, saw the Charleston strike as a way to work with Local 1199B in a “Union Power, Soul Power” alliance that could give SCLC a badly needed victory. Abernathy also saw involvement as a way of demonstrating his leadership ability as King’s successor. On April 25 Abernathy and 101 demonstrators were arrested and Governor McNair ordered 500 National Guardsmen to patrol city streets with bayonets. Three nights later Coretta Scott King told more than 3,000 supporters that her late husband would have been there if he were alive. The next day she led a mass march in the hospital area. On May 1 Governor McNair ordered a curfew in Charleston from 9:00 P.M. to 5:00 A.M. and declared a state of emergency in the city when incidents of rock-throwing and fire-bombing increased as the strike dragged on and frustrations grew. The New York Times had already termed the strike “the country’s tensest civil rights struggle.” On May 2 Abernathy was released from jail on bond, partly to try to defuse the situation.

The continuation of the strike hurt Charleston’s economy and reputation. Supporters honored SCLC’s call for a boycott of city businesses. In addition, tourists tended to avoid a city with racial strife and a curfew. Observers estimated that the strike ultimately cost Charleston more than $15 million in lost revenue. Economic pressures intensified political pressure to settle the strike.

On Mother’s Day, more than five thousand marchers heard Abernathy, Moultrie, Walter Reuther of the United Auto Workers, and five congressmen denounce the intransigence of white state officials in strike negotiations. On June 2 the curfew ended, but the arrest of Abernathy on June 20 led to a near-riot and the curfew was reinstated. Leaders of the predominately black International Longshoremen Association speculated about closing the port of Charleston to increase pressure for a fair settlement. Meanwhile, negotiations between Bill Saunders, representing the strikers, and MCH vice president William Huff led to an agreement. The twelve fired workers would be rehired, pay would be raised to the federal level, and a formal grievance procedure and a credit union would be established; but no union recognition or official collective bargaining would be permitted. The workers accepted the compromise, but McCord balked, backed by U.S. Senator Strom Thurmond and Congressman L. Mendel Rivers. However, when an HEW investigation charged MCH with thirty-seven violations of civil rights statutes and threatened to cut off $12 million in federal funds, McCord finally yielded. MCH strikers claimed victory, and CCH workers soon settled their strike on similar terms.

“We wanted better pay,” said Ms. Brown. “We was tired of being worked so hard. All we wanted was a little bit of money for the hard work that we’d done. We didn’t get that. Instead, we got jailed. We got put in jail. We got whipped. We got beat. I got kicked out my house.” The strike’s results were significant at the time. Female MCH and CCH workers believed that their actions had led to “a new relationship of mutual respect and dignity” on the job and to improved race relations in the community. In 1970 Charleston elected its first black state legislator since Reconstruction as well as several black city council members. But Local 1199B in Charleston folded after a year, undercut by its lack of official standing.

They hired more people in the city council because of the 12 women that stood up for what was right but twenty-five years after the strike, Mary Moultrie lamented that “a lot of things change, and then you see them gradually regressing.” In 1996 the Department of Labor cited the Medical University of South Carolina for four violations of discrimination laws and fourteen other related employment practices. “We got to fight on for what is right,” said Brown. “What are we going do about it? We gonna stand still and let it happen to us all over again? Let’s pass the torch. Let’s don’t leave it where it’s at,” said Brown.