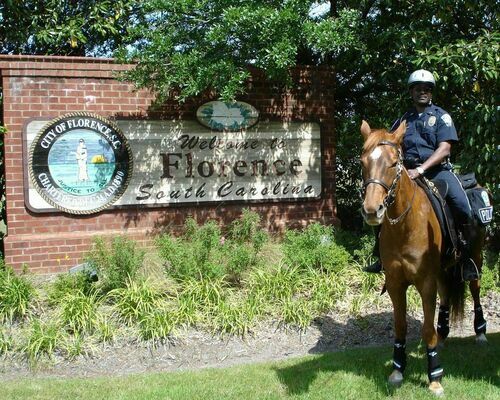 FLORENCE/N. CHARLESTON S.C. - Lieutenant Sam Toney was a 39-year veteran of the Florence City Police Department (FCPD) who was serving as a Squad Commander in the Uniformed Patrol Division at the time of his death. His career ended on watch as a lieutenant, when he passed away from natural causes at the age of 64. He was not retired, because he truly loved what he did. Lt. Toney loved to protect, serve and create positive change, and he did so—much outside of the expectations of his job description.

During his tenure Lt. Toney also served in the crime prevention unit and in the criminal investigations division as an investigator. Lieutenant Toney was well respected in and outside of the City of Florence. He was a Community Police Officer long before anyone ever thought about that as being the most effective law enforcement practice.

“Sam had a passion for seeing the youth of our community exceed in life too. During his employment he worked with many police department programs involving youth activities and camps. He always developed a special rapport with the children that he came into contact with. He had a quick wit and an ever-present smile on his face. He also had an innate ability to defuse tense situations with a very composed demeanor and calm voice – he was just easy to talk to,” according to Major Carlos Raines.

Born and raised in Florence, SC where her father policed for 39 years, his daughter, Samantha K. Toney, longed to keep her father’s legacy and impact alive, by continuing the work he was doing prior to his death. The same month of his passing, Samantha launched the Samuel Lee Toney Sr. Foundation, a 501c3 nonprofit in honor of her dad. The foundation is located in North Charleston, and includes the following programs:

Camp F.E.V.E.R. - Camp Fever, was a collaboration with the late Terrance Carraway. Officer Carraway, who worked for the patrol division supervised by Lt. Toney at FCPD, also made the ultimate sacrifice in 2018 during a shooting that occurred in the process of him serving a warrant. Officer Carraway and Lt. Toney ran Camp Fever for the youth each summer, scraping together funding with the help of friends, family, business sponsors, and even their own pockets.
Equine Therapy: Lt. Toney was also a mounted officer on the Equine Unit of FCPD. In additional to equestrian patrol, he would use his two trained police horses, Star and Princess, during Camp Fever for youth therapy and adventure. When his daughter, Samantha K. Toney reached the age of 14, he taught her how to ride horseback on Star and Princess. Since then, she has shared a deep love for equestrian life. After Lt. Toney passed, Samantha acquired custody of both Star and Princess. She uses both horses for youth therapy in Charleston, SC. She has since partnered with The Lowcountry Autism Foundation to begin providing Equine Therapy to autistic youth using Star & Princess in her father’s honor.

Grants & Scholarships: Lt. Toney was big on education, respect, and professionalism. Samantha decided that the focus of the foundation would be to uplift socioeconomically disadvantaged youth morally, educationally and professionally in order for them to become monuments of change and inspiration in the community. She is planning to begin awarding scholarships to select students who study law, and grants to graduating seniors with “concrete business ideas” to help them become entrepreneurs.

One of his biggest projects, Camp Fever, catered to youth in the Florence community and surrounding areas who were lacking in moral support and leadership in their lives. This program was designed to teach young people in the community principles of respect, leadership, morality and how to create and cultivate healthy relationships amongst one another as well as with law enforcement.

"I am excited about this Foundation being the raw example of my dad's heart for helping people. My ideas for where I'd like to take this organization are different-- they're a bit out of the box. However, my dad thought out of the box when he figured he'd round up about 40 police officers on his squad and take them out in the woods to go camping with a bunch of kids that were a little rough around the edges. No internet. No cellphones for the kids. No electronic games. No hot water. He wanted officers knee cap-to-knee cap with them, in the same kayaks with them, playing the same games, eating the same camp food. Sleeping in their cars while the kids slept in their protective view. He wanted full on bonding and building trustworthy relationships. I want to encompass that, and take it to a whole new level." Said Samantha. Expanding on her father’s ideas, Samantha feels as though the baton has been passed.