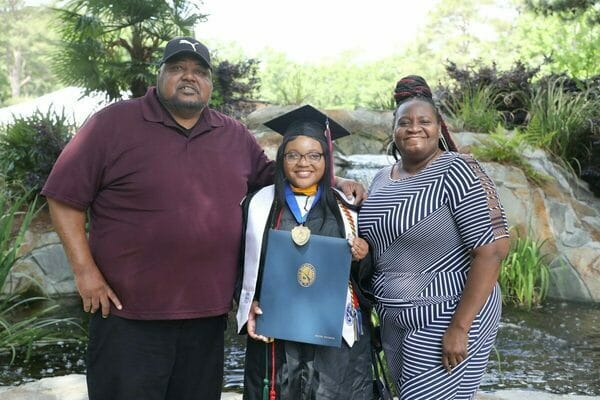 The praise is figurative, of course. Williamson isn’t a singer, dancer or musician. She is a first-generation college student who graduated with honors with a bachelor's degree in biology from Francis Marion University on Saturday.

Dr. Jon Tuttle, the director of FMU’s honors program, is Williamson’s adviser and one of her biggest fans. “She is the very embodiment of resolve,” Tuttle said. “She gets stuff done, and she will not quit. I think she looked around her when she was a kid and thought, ‘I'm going to have to take over here. I’ve got to do this myself.’” That hard work has paid off. Williamson is just 20 years-old. She skipped fourth grade and graduated from Darlington High School when she was 16.

Her grade-point average at FMU is 3.97. She has gotten all A’s except for a B-plus in physics, which she took online during the pandemic. She also took an internship last semester with S.C. Rep. Jim Clyburn’s office.

Like many first generation college graduates, Williamson had to overcome many hurdles to get to where she is now. When COVID-19 hit in the middle of her sophomore year, Williamson had to worry about more than just the disruption to her classes. She was raised by her grandparents, Joyce and Alex Williamson, who she calls Mom and Dad. Their house in Darlington is a busy one, with two siblings, three cousins and a young niece. An aunt lived with them until she died recently of bladder cancer. Williamson’s grandfather is battling non-Hodgkin’s lymphoma.

Full hands. Williamson has been a caregiver to her parents and family, a role that excellerted during the pandemic.

“There were seven kids doing homework at a table at the same time on the same broadband, and then you're getting dinner ready,” Williamson said. “I'm trying to make sure we all stay focused and everybody does their homework and everybody does classwork and everybody is getting time away from each other, because everybody needs a little bit of personal time. I made sure the kids were staying active. Everybody has a little tension in their family, but nothing that wasn't manageable. We all love each other as much as anybody could.”

Jennifer Floyd, FMU’s biology laboratory manager, marvels at Williamson’s ability to excel at her studies, while taking care of her family.

“She was always there for her family,” Floyd said. “They were definitely the top priority on her list, but I was always impressed about how she was able to take care of herself and her schoolwork and her job on top of everything else.”

In many ways Williamson’s efforts sound more superhuman than a rockstar. That might explain her love of comic books, fostered by an FMU class that fulfilled her literature requirement. “I found out I like them, and they're just as complex as a regular book,” she said.

Though she does like superheroes, Williamson says she is not one herself. “I don’t have too much of an inflated view about myself,” she said. “I hope my siblings can look up to me and see how hard I'm working for them. I hope that my family is proud of me, but I wouldn't say that I'm a superhero.” Williamson will say this, “I wouldn't trade any of my experiences,” Williamson said. “They’ve made me who I am.”

And just who is Ke’Ziyah Williamson? “She's a workhorse,” Tuttle said. “There are no excuses. There is no falling short. There is no stopping. She just gets it done.She’s not phony or dramatic. She just sees the problem, solves the problem, moves on and is very authentic. She has potential that she maximizes. She uses every ounce of energy and talent that she's got, and she gets it done every time.”

Graduate school is next, though Williamson is not yet sure where she will go or what she will study.

“I'm considering physician assistant school along with a Masters in either epidemiology or public health,” she said. “That would give me an opportunity to blend my political science background as well as my biological background.”

Whatever the future holds, Tuttle feels confident in predicting success for Williamson. “She’ll be running an agency at some point,” he said, “or she’ll be running her own business.”