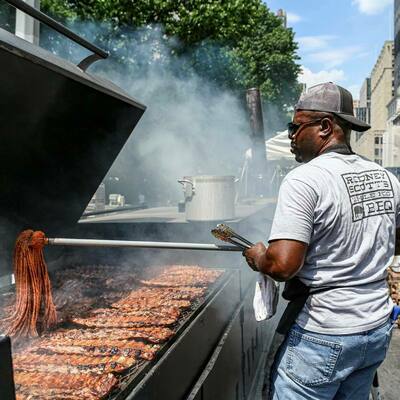 Pitmaster Rodney Scott is a BBQ legend. For starters, he has been cooking whole-hog barbecue over wood coals since he was 11 years old. He’s also the founder of Rodney Scott’s Whole Hog BBQ, author of Rodney Scott’s World of BBQ and he was the subject of a full episode of the award-winning Netflix series, Chef’s Table.

With May being National Barbecue Month and July 6th being National Fried Chicken Day, who better then to share the best fried chicken recipe (and insider tips for pulling it off like a pro) than Scott?

After getting his start in whole-hog barbecue at at young age, Scott worked with his family in their BBQ stop in Hemingway, SC until 2017 when he opened Rodney Scott’s BBQ in the North Central neighborhood of Charleston, SC. In that same year the restaurant was named one of the 50 Best New Restaurants by Bon Appetit and in 2018, Scott was awarded the James Beard Foundation’s award for Outstanding Chef Southeast. In 2019 Rodney Scott’s BBQ opened a second location in the Avondale neighborhood of Birmingham, AL and in the summer of 2021, a third location in Atlanta, GA bringing whole-hog, South Carolina-style barbecue, along with his famous “Rodney’s Sauce” to another part of the South.

Once you take the chicken out from the overnight brine in the fridge, go ahead and bread it and let it sit for about 30 minutes before frying. This will set the batter and the chicken will be at a better temperature for frying.

Make sure the oil is at the right temperature (350-365 F) and don’t overcrowd the pan or the temperature will drop too much.

Fry in batches and move the chicken to a cooling rack when done.