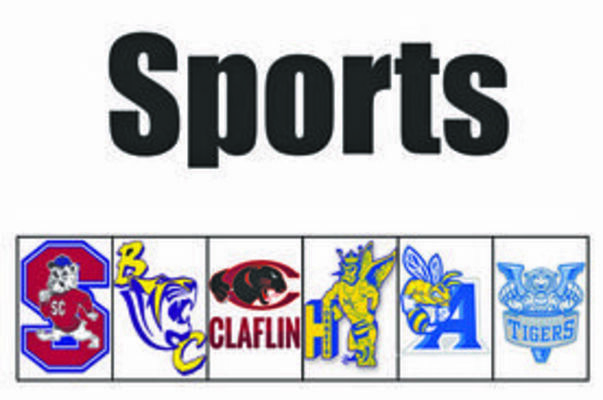 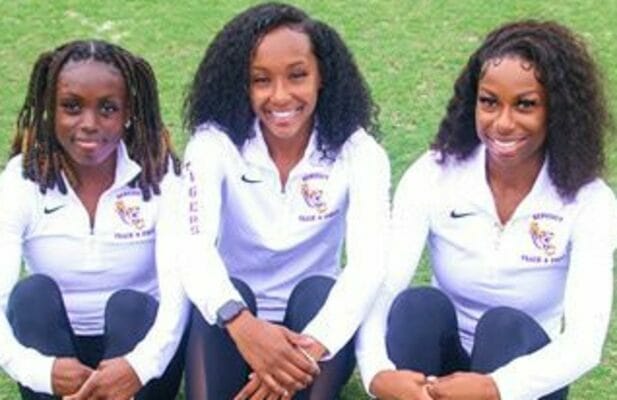 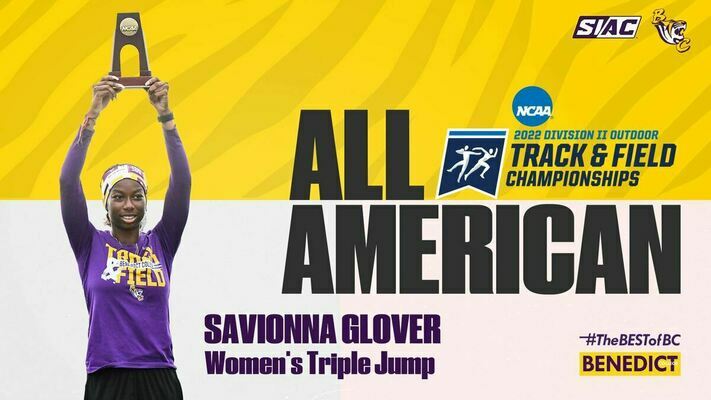 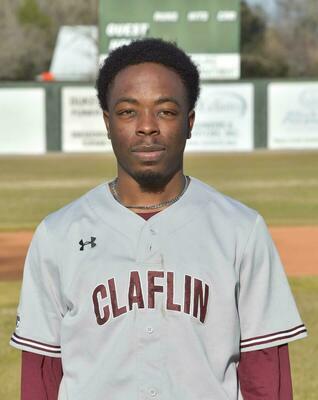 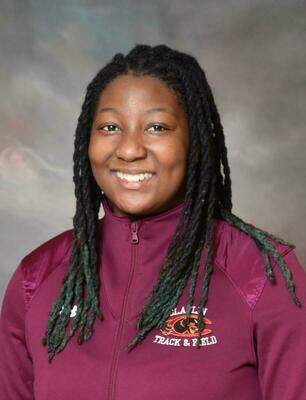 The Benedict College Lady Tigers will be looking to bring home another national championship as they prepare to send three representatives to the NCAA Division II Outdoor Track & Field Championships in Allendale, Mich., on the campus of Grand Valley State University, this week.

A year ago, Benedict won its first-ever national championship when Shemar Miller won the men's triple jump title. Now, the Lady Tigers will be sending two contestants in that event – freshman Jada David and senior Savionna Glover. Also competing will be sophomore Eilika Lane in the women's 400-meter hurdles.

"I think this is a special group. They are definitely hard workers and deserve to go," said Benedict head coach Frank Hyland.

All three are peaking their best performances at the right time. David, who won the triple jump event at the SIAC Championship, improved on her performance at last week's Lee University Last Chance Meet, jumping 12.54 meters (41 feet, 1 ¾ inches). She heads to the national championship ranked 11th, just .63 meters (2 feet, ½ inch) behind the top-ranked triple jumper.

"She is a shocker. I've never had a freshman come in and jump over 40 feet," Hyland said. "She didn't do that in high school. And being a freshman, I expect big things from her in the future."

"I'm excited," David said about heading to the national championship in her first year. The freshman from Athens, Ga., said she didn't believe this would happen when the track season started, but Coach Hyland kept encouraging her throughout the year.

"Coach kept reminding me to trust the process, and I did. And here we are," David said.

Having a veteran teammate like Glover helped David as the two pushed each other throughout the year.

Glover will also be competing in the triple jump. She recently jumped 12.39 meters (40 feet, 7 ¾ inches) at the Liberty Twilight Qualifier, and is ranked 20th in the nation.

For Glover, a trip to the nationals has been a long time coming. The 2020 championship was cancelled, and she barely missed qualifying last year despite competing in just a handful of meets. So, she enrolled in graduate school and stuck around for an extra year.

"I have to give a shoutout to Savionna Glover," Hyland said. "She's one of the hardest workers, and she missed going last year by just one spot. For her to bounce back after all her injuries, and showing by her leadership that hard work definitely pays off, I'm happy for her."

"I'm excited. It's been a long time in coming," Glover said. "That was my biggest goal coming back this year, to make it to nationals."

Glover said it is no secret why Benedict student-athletes have had so much success in the triple jump, an event where competitors have to hop, skip and jump and requires speed, jumping ability, and perfect form.

"We have the best coach ever," Glover said. "He really helps us get our phases right. Most of us struggle with the second phase, and he really focuses on that."

She had a personal-best performance at the Liberty meet, but still sees room for improvement at nationals.

"I still have major room to work on my second phase, which is my weakest part. I've been focusing on that and hopefully everything will come together."

The women's 400-meter hurdles will have a preliminary race at 7:55 p.m. on Thursday, May 26. The top nine runners will advance to the finals, which will be held at 4:20 p.m. on Saturday, May 28. The NCAA will stream the national championship here.

Lane, who won gold medals in the 400-meter hurdles, 400-meter dash, and 4x400-meter relay at the SIAC Championships, is ranked 16th in the field of 20 women in the 400-meter hurdles event. She topped her time from the SIAC Championship at the Liberty Twilight Qualifier on May 4, finishing at 1:00.64. Ten competitors at the championship have all beat the one-minute mark, including Minna Sveard of Texas A&M Commerce, who leads the field with a time of 57.47.

"She is definitely the Tiger of the group. She could have qualified in four events, and there was nothing that was going to stop her from qualifying," Hyland said. "She is going to be something to be reckoned with."

"My goal is just to make the finals first. After the finals, I would like to run at least 57.8 to 58.6, and I think I'll be fine from there. I just have to do what my coach always tells me to do, and that is run my own race," Lane said.

"I feel like I'm peaking right now. At conference, I did a huge personal best, but I wanted to go below one minute. That didn't work out, so I just have to trust the process and have faith and trust God that it will come in his timing."

Glover finished eighth with a personal best jump of 12.39 meters (40 feet, 7 ¾ inches). Glover recorded that mark on her second jump. She was in seventh place until the sixth and final jump, when Antionija Radic from Angelo State University jumped 12.42 meters (40 feet, 9 inches) to jump over Glover.

"This is an amazing success story," said Benedict head coach Frank Hyland. "She broke her foot in 2019, then the 2020 season was cancelled due to Covid. She missed going to nationals last year by just a few spots, but came back for her Master's degree after sitting out a semester. She took over as my team leader to push us to another conference championship and showed up big when it counted. Words can not explain how proud I feel for this young lady."

Benedict freshman Jada David finished 18th overall. She jumped 11.76 meters (38 feet, 7 inches) on her first jump, then jumped 11.68 meters on her second jump and 11.35 meters on her third jump and did not advance to the finals.

After a solid season on the mound for the Panthers, Claflin senior Charles Jackson has been selected to take part in the 2022 Minority Baseball Prospects HBCU All-Star Game. The game, which is presented by the Henry Louis Aaron Fund, will offer the all-star experience and exposure to HBCU baseball players from across the nation.

Jackson is a junior from Macon, Georgia who will go into the game as a pitcher. He earned his spot in the all-star game after a strong season on the mound for the Panthers. He finished the season with 38 total innings pitched and 34 strikeouts. He will be joined by fellow HBCU baseball players from both the NCAA Division I and NCAA Division II. Jackson will be a member of Team Marquis Grissom and will be led by head coach Marquis Grissom, a former member of the Atlanta Braves and a graduate of Florida A&M University.

The 2022 MBP HBCU All-Star Game is set for a 7:30 p.m. first pitch on Friday, June 3rd at Truist Park, home of the Atlanta Braves. The game will cap a weekend of events that will serve as a platform to celebrate HBCU institutions, HBCU All-Stars, local Black businesses, the Henry Louis Aaron Fund, and the MBP Helping Hands Foundation. Among the events will be an HBCU All-Star Home Run Derby on Thursday, June 2nd.

Claflin senior Zaria Nelson completed her collegiate career on a high note with a terrific performance at the 2022 NCAA Division II Women's Outdoor Track & Field National Championship Meet. Competing against the best throwers in the nation, Nelson placed 11th at the meet. The performance was especially impressive as she entered the meet as the 20th ranked performer.

Nelson competed in the first flight of competition and she recorded a best throw of 148' 2" (45.17m) at the meet. The throw was her second best of the season and over 10 feet better than the 135' 10" (41.40m) that placed her second at the Central Intercollegiate Athletic Association (CIAA). Her best throw of the season came at the GS Spring Classic hosted by Georgia Southern University.

Since middle school, South Carolina State University graduate Christopher Simon was motivated to have his own money and be his own man. At an early age, he established a savings account because he was determined to invest in a business he could call his own.

"I was always the type to think ahead and look towards the future. I've always wanted my own," he said.

Simon just received his bachelor's degree in physical education at this spring's commencement. He is proud to say that alongside having a degree, he has his own business that continues to thrive.

"I started C&J Lawn LLC in 2014 when I was in middle school. I was really motivated by watching other people in the neighborhood and learning from their experiences," Simon said. "The business started off small with just a rake and a push mower. But after people started meeting us and learning who we are, the business grew."

The inspiration behind the name C&J Lawn came from his parents' names, Christopher and Joan.

Simon considers himself to be an outgoing, family-oriented person and likes to incorporate those values in his business. He said what sets C&J Lawn apart is their ability to connect with the families they work with. He also loves to interact with kids and teach them a little about what he does.

"Sometimes clients have kids who don't want to stay in the house," Simon said. "One time we were working on this lady's yard and her kid was so interested in what we were doing outside. So, we allowed him to ride on the mower with us while we were cutting the yard. Some people wouldn't trust a kid around their equipment, but we actually like to get involved with the families."

Even though Simon takes his business seriously, he likes to make it fun for his employees and clients. He recognizes that to form that trust and comfortability within clients, you must know how to build a friendly relationship with them.

Building those relationships with his clients paid off because not only do they refer and continue to do business with him, but they also invite him to cookouts and neighborhood events.

Simon said as his business grows, he would like to advance the landscaping that they do to cater to more commercial properties. He also wants to delve into forestry and landmarking.

C&J Lawn LLC is located in Dalzell, South Carolina. If you need yard assistance, contact them on Facebook at CJ Lawn or call (803) 458-7015.