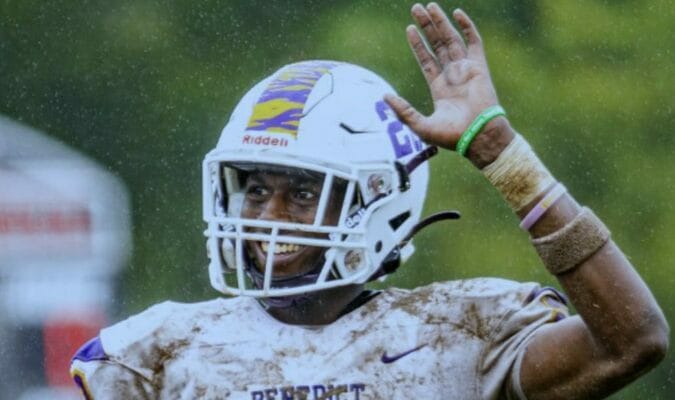 JACKSON, Tenn. – The Benedict College Tigers shut down the Lane Dragons and held them to just 92 yards of total offense on a wet and muddy field and took a 14-0 victory on Saturday.
The Tigers improve to 2-0 on the season. Lane falls to 0-2. This game does not count in the SIAC standings.
Benedict forced six fumbles on the sloppy field, including Ja'ron Kilpatrick forcing a fumble on a sack of Dragon quarterback Michael Huntley at the Lane 8-yard line. Loobert Denelus recovered the fumble in the end zone for Benedict's first score of the game, coming with 10:28 left to play in the third quarter.
Late in the fourth quarter, Benedict's Tayven Grice recovered a fumbled Dragon punt at the Lane 7-yard line. Deondra Duehart rushed for five yards on first down, then scored from two-yards out on second down to give the Tigers a 14-0 lead with 3:26 left in the game.
Five of Lane's first eight drives ended in a turnover, as Benedict picked off two passes and recovered three fumbles. Ja'Voni Melidor intercepted Huntley on Lane's first drive. Kilpatrick forced a fumble on Lane's second drive. Denelus forced a fumble on Lane's fourth drive, and it was recovered by John Hannibal. Fern Romero III recovered a fumbled punt at the start of the third quarter.
Benedict took over at the Lane 25-yard line and drove to the Lane 6-yard line, but the Tigers couldn't convert on a fourth-and-one. Lane took over on downs, but Kilpatrick sacked Huntley and forced the fumble that Denelus recovered in the end zone.

The Tigers struggled in the elements as well. Benedict had 202 yards of total offense, but fumbled three times and Reginald Davis Rogers missed one field goal attempt and had another blocked.
Brandon Lane and Olajuwone Smith led the Tigers with seven tackles each, while Smith had Benedict's second interception, coming on Lane's next possession after the Tigers' first touchdown.

Benedict has a short turnaround before taking on Savannah State in a nationally-televised game on Thursday night. Kickoff is 7:30 p.m.