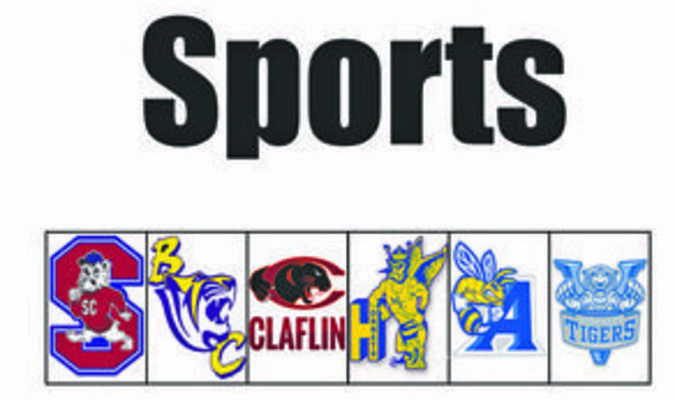 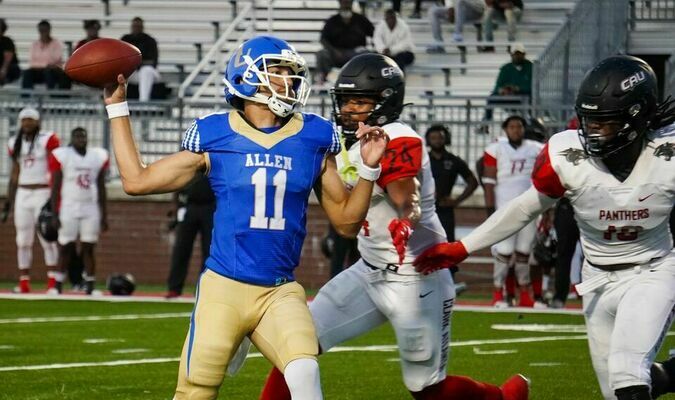 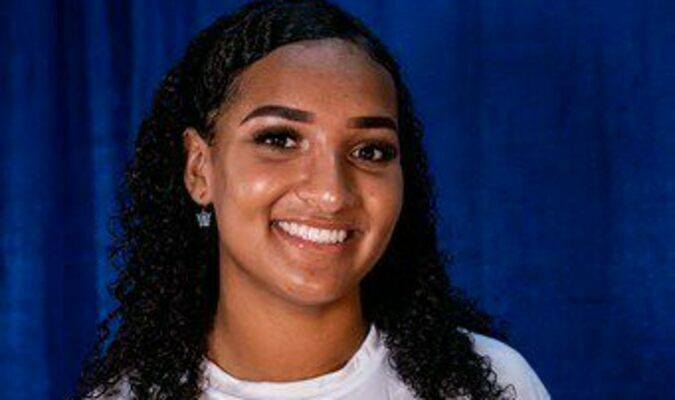 Maliyah Spencer was named Southern Intercollegiate Athletic Conference (SIAC) Volleyball Newcomer of the Week. Freshman outside hitter Maliyah Spencer leads the Yellow Jackets in kills on the season with 122 along with a hitting % of .222. She has helped Allen to their best start to a season in school history as the team stands at 9-6 overall and 4-4 in the conference. 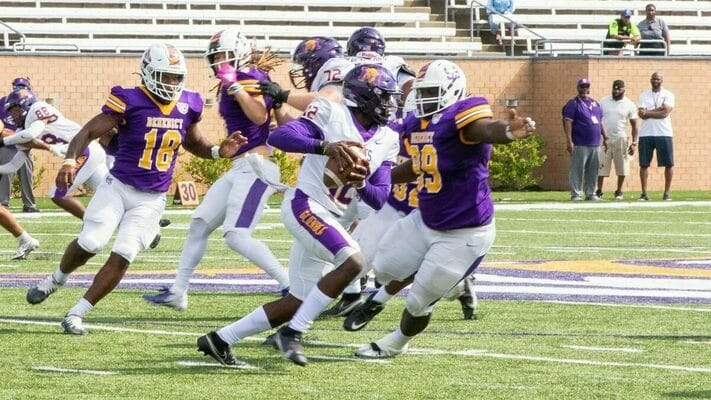 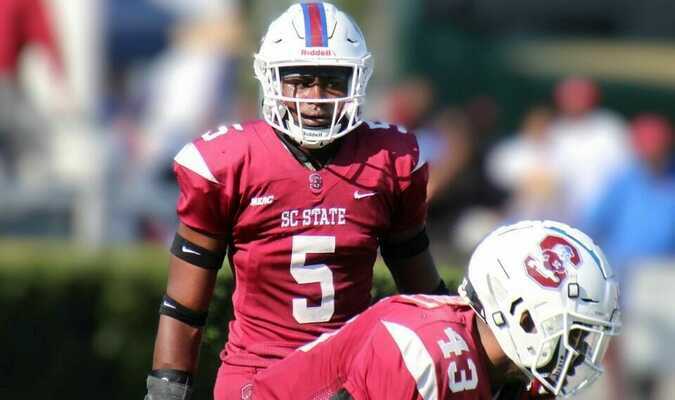 Junior QB Michael Reese threw for 231 yards and 2 touchdowns while also rushing or two more scores and totaling 267 yards of offense along with an interception while sophomore RB Beau Herrington rushed for 95 yards and a score. Freshman WR Armone Harris then led the wideouts with 6 catches for 72 yards and a touchdown while sophomore WR/RB Jamal Jones registered 87 yards of total offense including a receiving TD.

Freshman KR Reggie Williams led the special teams returning a kickoff 97 yards for a score while totaling 154 in return yardage. Senior Linebacker Gary Bourrage then led the defense with 11 tackles, a sack and a tackle-for-loss while sophomore DE Justin Eaton also had 7 tackles, a sack, and 2 TFLs. Senior Richard Hayes also played well tallying 6 tackles, 2.5 sacks, and 3.5 TFLs on the night while DB Dahlil Wilkins recorded 5 tackles with an interception and 2 pass breakups. Linebacker Kirkland Boone had 6 tackles, 2 TFLs and a sack as well.

After CAU got on the board early in the first quarter on a quick drive, Allen came back with a score of their own as Reese threw a TD strike to to Jones. Reese then led a 12-play 80-yard drive later in the first as he scampered in for the score on a 13-yard run to give AU the 14-7 lead. After CAU answered right back with a score of their own on their next possession, the Yellow Jackets' Reggie Williams then decided to run the kick back 98 yards to give Allen the 21-14 lead after one quarter.

Clark then scored 14 quick points to open the second quarter to take the 28-21 lead including recovering an AU fumble in the end zone for a score. However, Allen responded with a 5-play 40-yard drive that ended with Reese rushing 14 yards for another score as the game went into intermission tied at 28 apiece.

Allen then dominated the third quarter outscoring the Panthers 13-0 as Reese led two more scoring drives. The first score came early in the third as AU marched right down the field and punched it in with a Herrington one yard score. Allen then made it 41-28 after three quarters as a 7-play 82-yard drive ended in a Reese 21 yard TD pass to Harris.

Unfortunately, Clark Atlanta would get to within 41-35 with an early fourth quarter 32-yard score on fourth down before CAU scored the game-winning TD with five minutes remaining. Allen would then get inside the red zone on their final drive of the game, but would come up just a few yards short on fourth down to suffer another heartbreaking defeat.

Freshman outside hitter Maliyah Spencer leads the Yellow Jackets in kills on the season with 122 along with a hitting % of .222. She has helped Allen to their best start to a season in school history as the team stands at 9-6 overall and 4-4 in the conference.

COLUMBIA, S.C. – The Benedict Tigers, the nation's third-toughest team to score on, put the defensive clamps on Miles College to take a 20-3 victory on Saturday in Charlie W. Johnson Stadium to remain unbeaten.
Despite mustering a season-low 132 yards of offense, the Tigers secured the win thanks to a defensive touchdown, a special teams touchdown, in addition to one score on offense. Benedict improves to 6-0 overall and remains 3-0 in the SIAC. Miles falls to 1-5 on the season and 1-2 in the SIAC. This game counted as a conference contest for Miles, but not for Benedict.
"Again, and I'm always going to say this, to God be the glory. And I mean that when I say that because wins are hard to come by," Benedict head coach Chennis Berry said. "Especially against good football teams. I knew going into this game that Miles College had a good team. They've just been playing against some good competition. But at the end of the day, we accomplished the mission, and the mission every week is to go 1-0. Regardless how it happened, we found a way to go 1-0, so I'm proud of our football team for being resilient through it all."
Benedict held Miles out of the end zone, their second opponent this season that failed to score a touchdown. The Golden Bears avoided a shutout with a 27-yard field goal by Jackson Spradlin with 9:43 left in the game.
After a scoreless first quarter, a Jared Eubanks punt pinned the Golden Bears at their own 8-yard line. On third down, Miles quarterback Jacob Millhouse's pass was tipped at the line of scrimmage and Jayden Broughton caught the loose ball and only had to return it two yards for a Benedict touchdown. Reginald Davis Rogers added the extra point for a 7-0 lead with 12:04 left in the second quarter.
Later in the second quarter, the Golden Bears punted the ball, and Kendall Norman had a 77-yard punt return for a score to give Benedict a 13-0 lead.
"Kendall Norman is an explosive freshman for us," Berry said. "Any time you put the ball in his hands, he has a chance to take it to the house."
fter a Miles punt, the Tigers went on offense and had their longest drive of the game, a six-play, 44-yard drive that resulted in a nine-yard scoring pass from John Lampley to Jayden Thomas.
"We didn't play our best football game. But at the end of the day, we're 1-0," Berry said. "I thought their defense did a really good job. I thought our defense did a really good job. And I think our special teams did a really good job. There are three phases to football, and sometimes other phases have to play lights out. But ultimately, a win is a win."
With the offense getting just eight first downs for the entire game, Eubanks was called on to punt eight times. He averaged 44.8 yards per punt, with a long of 62 yards, and had five punts downed inside the 20-yard line, including four downed inside the 10-yard line. A third-quarter punt was downed at the 1-yard line.
"Eubanks was definitely on his stuff today," Berry said. "He did an amazing job today."
The Tigers will travel next week to defending SIAC champions Albany State next week in a battle for the top spot in the East Division.
"We've got some things we've got to clean up, there's no question about it," Berry said. "You like cleaning up things after a win, though. We've got to get better, but that's what good football teams do. We're going to enjoy this win for 24 hours, then get ready for a good Albany State football team.

**Bulldogs Fall Short In Tough Battle Versus Rattlers At Home**
ORANGEBURG, SC— Graduate quarterback Corey Fields, Jr. threw 17-of-48 for 237-yards and two touchdowns but fell short in an come from behind effort to fall in an 20-14 defeat to visiting Florida A&M Saturday (Oct. 8th) at Oliver C. Dawson Stadium/Willie Jeffries Field.

Despite the loss, Fields, Jr. set a new school record for pass attempts in a game with 48 on the day. His previous record was 47 versus New Mexico State in 2021.

SC State down by as many as 20-points early in the fourth quarter managed to claw their way back into the contest, after a pair of touchdown tosses from Jeremy Moussa to Xavier Smith (63-yards) and Jah'Ma Sheread (35-yards) put FAMU ahead 14-0.

J Romo-Martinez nailed back-to-back field goals of 43 and 38-yards to lift the Rattlers ahead soundly 20-0 at the 11:09 mark in the third quarter.

Redshirt-senior Shaquan avis found his rhythm to put the Bulldogs back in striking distance with a pair of touchdown catches from Fields of 14 and 44-yards to make the score 20-14 late in the game.

Florida A&M would hold to close out with an 20-14 victory over South Carolina State.

Redshirt junior linebacker BJ Davis spearheaded the defense finishing with five tackles and a game-high two interceptions on the day. Sophomore linebacker Aaron Smith led the way with eight tackles along with defensive ends Patrick Godbolt and Jeblonksi Green, Jr. with seven each in the loss.

"It's sad when you they that close and just can't finish to get the win," said head coach Buddy Pough. "We seem to have a way of starting 1-4 but I am confident we will turn things around."

Davis finished with five catches for 81-yards and two touchdowns.