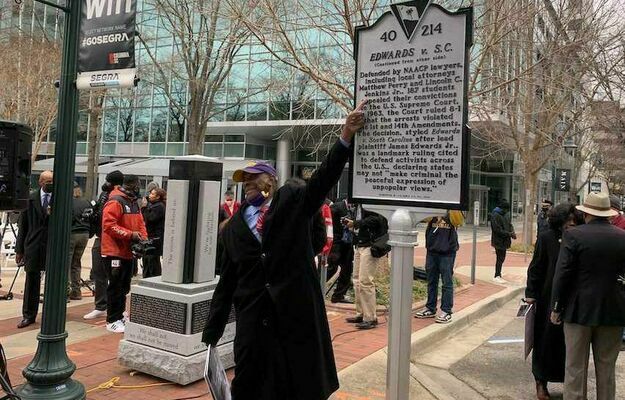 Rev. James Edwards touches a monument to protesters in the 1961 march on the State House.

The historic protest took place March 2, 1961, when high school and college students marched to the State House to protest racial inequality. The students were told they could march around the State House one time in silence. After they started singing patriotic and religious songs, 187 protesters were arrested for breach of peace.
Previous Next

The Center for Civil Rights History and Research at the University of South Carolina unveiled a new historical marker on March 2 to commemorate the courage of hundreds of students who marched on the South Carolina State House 60 years ago. Many of the students were arrested, and the appeal of their convictions eventually was heard by the U.S. Supreme Court, leading to a legal precedent protecting the rights of protesters.

The marker, at the corner of Gervais and Main streets, was unveiled in a ceremony organized by the center, along with state and local leaders and community partners. In addition to the marker, a granite monument titled "We Shall Not Be Moved," which includes the names of all participants who were arrested, will be installed at a later date at a location to be determined.

The historic protest took place March 2, 1961, when high school and college students marched to the State House to protest racial inequality. The students were told they could march around the State House one time in silence. After they started singing patriotic and religious songs, 187 protesters were arrested for breach of peace.

the rev. james edwards touches a monument to protestors in the 1961 march that will be permanently installed at a later date

The Rev. James Edwards touches a monument to protesters in the 1961 march on the State House. That monument will be permanently installed at a later date.

Almost two years later in a landmark decision, the U.S. Supreme Court ruled in Edwards v. South Carolina  that the state had violated the protesters’ First Amendment rights.
“This victory before the United States Supreme Court fortified the rights of protesters in ongoing struggles for justice and equality. As we dedicate a historical marker, we honor the courage of young women and men who refused to back down in their quest for justice for all,” said Bobby Donaldson, director of the Center for Civil Rights History and Research.

Rev. James Edwards Jr., the lead plaintiff in the appeal, said, “We wanted to let the leaders of South Carolina know that we were determined to fight for justice and equal opportunity. We wanted to send that message directly to the people in the State House.”

On the morning Edwards departed the Benedict College campus and made his way to Zion Baptist Church and then to the State House, he had no idea that he was marching into the pages of history, Donaldson said.

“For peacefully protesting, he and hundreds of students went to jail and faced prosecution. Their protest led to a landmark United States Supreme Court case. Now, Rev. Edwards’ name is etched in stone near the very place where he battled racial injustice 60 years ago,” Donaldson said.

Edwards called the marker and monument “a gift from God.”

“I felt overwhelmed and blessed to see my civil rights work remembered,” Edwards said. “When I am passed and gone, my name will be seen and known. My children and grandchildren when know that I’ve done something for my people. I can run my hand across a stone and feel my name. It is not a tombstone in a cemetery somewhere, but a marker and a monument right across from the Capitol where I protested. I’m glad God kept me here to see this day.”

For state Rep. Leola Robinson-Simpson (D-Greenville), also a participant in the march, the marker unveiling was both “solemn and joyous” because many of the march participants have passed away and because “we’re still fighting for justice,” she said.

Former chief justice of the S.C. Supreme Court Jean Toal, who was present at the march, put the legal case in historical perspective, pointing out that Edwards v. South Carolina was the first civil rights decision based on the First Amendment. Previous civil rights cases – including Brown v. Board of Education and its predecessor in South Carolina, Briggs v. Elliot – relied upon the 14th Amendment.

“We had not had a decision that rested on the First Amendment as a protection for the expression of views to end segregation. This was the seminal event protecting so many demonstrations in the future,” Toal said.

Rep. James Clyburn (D-S.C.), who participated in the 1961 march as a S.C. State University student, also addressed the legal precedent set by the ruling through a tribute in the Congressional Record: “I can attest that we were committed to the fight for civil rights and had no idea that our actions would contribute to preserving the right to peacefully protest for future generations.”

Of the historical marker, Clyburn said, “Remembering our history is important. History is informative and should be instructive. This marker reminds us of past sacrifices and hopefully will guide us as we continue our ‘pursuit of a more perfect union.’”

The unveiling of the marker was a partnership of the UofSC Center for Civil Rights History and Research, which organized the program; Columbia SC 63: Our Story Matters, which funded the marker with community support; the city of Columbia; and Historic Columbia. To uncover and tell the deeper story of the 1961 march, the center in partnership with Columbia SC 63 identified people involved, conducted oral histories and documented their stories.

How Black Churches Can Spell Salvation For The ...

Some Christians Follow A Few Of The Ten Command...

Why Can’t People Focus More Atention On That Wh...