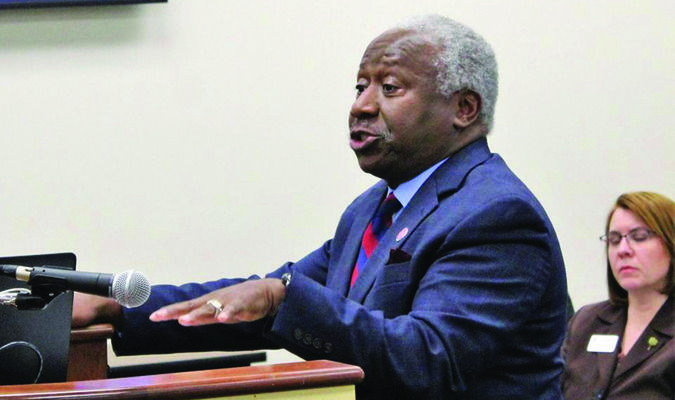 The South Carolina State University Faculty Senate has passed a resolution stating it has no confidence in the university’s president, with low enrollment and the return to classroom learning being key issues.

The Faculty Senate voted 18-2 in favor of the resolution on March 2.

It states, in part, that both S.C. State President James E. Clark and Provost Dr. Learie B. Luke “have failed the university, lost credibility and proven to be unfit to hold their positions based on their actions.”

Faculty Senate President Dr. David Staten said on Friday the people who participated in the vote are, “senators who represent various departments on the campus. We have a total of, I believe, 25 faculty senators. So only a few people did not vote, but those individuals who voted represent all of the departments on campus.”

Staten said he understands five university trustees plan to ask for a special board meeting to hear the concerns raised by the Faculty Senate.

The senate’s resolution states Clark and Luke failed to implement an effective enrollment-management plan and are facing the “lowest enrollment numbers at SCSU in two decades.”

Staten said, “The faculty does not take any pleasure in having this vote. It’s the reality that we’re dealing with right now. When President Clark and his administration took over during the fall of 2016, we had 2,648 students, full-time equivalents, and today we have 1,748 full-time equivalent students. That means we’ve lost close to 1,000 students under the current administration’s leadership.”

He continued, “Given that we have not seen a comprehensive recruitment nor retention plan, it makes it very difficult to see how the university can position itself moving forward with this current administration. Out of all the reasons listed, enrollment really played a big part in the faculty’s decision to move forward with no confidence.”

During a S.C. State trustee board meeting on March 3, Staten reported that the faculty had expressed several concerns in a series of questionnaires from the Faculty Senate.

“Faculty are really concerned just about their health and safety returning back to the campus in this COVID-19 environment,” Staten said during the meeting.

He said there were also concerns about enrollment and, “making sure that the university is following its policies and procedures as it relates to hiring.”

The senate’s resolution states that, “President Clark and the provost have failed to prepare the campus and to communicate such so that the faculty feels safe returning to campus amid the pandemic.”

The Faulty Senate also claims the president failed to produce a master plan and hasn’t resolved the university’s financial crisis.

It also expressed concerns over the president’s financial decisions, which “demonstrate a clear disregard for financial responsibility and reality by giving his cabinet members large, significant raises.”

The Faculty Senate issued a letter to board Chairman Rodney Jenkins on March 3, the date of the board’s regularly scheduled board meeting.

“The board received a letter, but the board has not met yet,” Jenkins said. Jenkins declined to reveal the contents of the letter. “I’d rather not have a conversation about that at this time before the full board has gotten a chance to see that because the letter just came to me. I need to make sure the full board is aware of what I might be saying and giving to the public at this time,” Jenkins said.

The Times and Democrat obtained a copy of the letter, which was written and signed by Staten, stating the main reason for the no confidence vote in both Luke and Clark was that “the university has deteriorated significantly under their leadership.”

The letter states low enrollment, along with “the discovery of various cabinet-level staff receiving significant raises in this current economic environment” and low morale among faculty members was among the reasons for the no confidence vote taken on March 2.

“The faculty has been extremely patient with the president and the provost and we recognize anecdotal accomplishments, but it is crystal clear that President Clark and Provost Luke are not capable of moving S.C. State University forward in a positive manner so that it reaches its full potential,” the letter states.

Staten said the Faculty Senate wants the university “to go in another direction.”

“If you don’t have confidence in a president, it’s really hard to work with that person moving forward,” Staten said.

He also referenced the S.C. State National Alumni Association’s calls against the president’s contract extension and lack of confidence in his performance in May 2020.

S.C. State trustees during a May meeting voted 9-1, with two abstentions, to extend Clark’s contract through June 2022 with an option for renewal for an additional two years based on his performance.

At that time, the national alumni association called for the board to issue Clark a one-year contract extension. It also asked trustees to set up a national search committee to find a new president.

He added, “The faculty definitely wants the university to seek out a change in direction in terms of leadership at the university.”

Staten said the Faculty Senate is looking forward to working with the board in the future. “We’re just looking to have a follow-up conversation with (Jenkins) to really just discuss the future of S.C. State and where the university is headed in the very near future,” he said.

The university issued a joint statement from Jenkins and Clark on March 15, outlining the safety, health and well-being of the university’s students, faculty and staff will remain a priority.

“We recognize there are some members of the university community whose health issues may have promoted legitimate concerns about returning to their work settings, which are not unique to any institution. Addressing those concerns has been essential for both the board of trustees and the administration,” the statement read.

The statement also indicated the university has taken many steps to mitigate the spread of the coronavirus, with decision-making led by the advice of epidemiology experts and aggressive methods to combat possible infection being employed.

“We have been among the most conservative in re-populating the campus, implementing remote instruction methods and limiting face-to-face interactions between faculty, staff, students and external visitors,” the statement read.

The statement continued, “We will continue to be prompt and deliberate in our response as such situations arise,” and also revealed that the university is preparing for what it expects to be a “full return to normal operations in the fall semester with more on-site classes.”

“We will continue to review our COVID-19 response plan and modify key safety protocols to adapt to a larger on-campus census. We emphasize the fact that remote learning will continue through the end of the spring semester. The summer term will follow the same protocol,” the statement said.

Over the past five years, S.C. State University has made remarkable progress.

The institution has moved away from its financial challenges and the threat of losing accreditation has been eliminated.

The university has finally come to a place where new relationships are being built and collaborative initiatives are providing much-needed financial, governmental, developmental support that ultimately benefits our students.

This is evident in accomplishments we celebrate, which include:

• A greater than $80 million positive financial impact on the university over the last four years, including the highest amount of state appropriations per capita since 2007.

• Three new state-of-the-art facilities worth over $15 million, including on campus in Orangeburg, at Camp Daniels in Elloree and the newest facility in Charleston. These are being followed by an additional four facilities around the state and a farm for our agriculture initiatives.

• A return to online status of five residential halls that were previously closed due to disrepair.

• Multiple "corporate" partnerships and collaborations that will yield over $25 million, along with a significant number of internships and jobs for our students with several others underway.

• A safe management of our campus in the midst of a COVID-19 pandemic.

• A significant increase in partnerships and collaborations (e.g. 3+2 and Bridge programs) with academic institutions around the state.

• Prior to the onset of COVID-19, university was on track to have one of its best financial performances in nearly a decade.