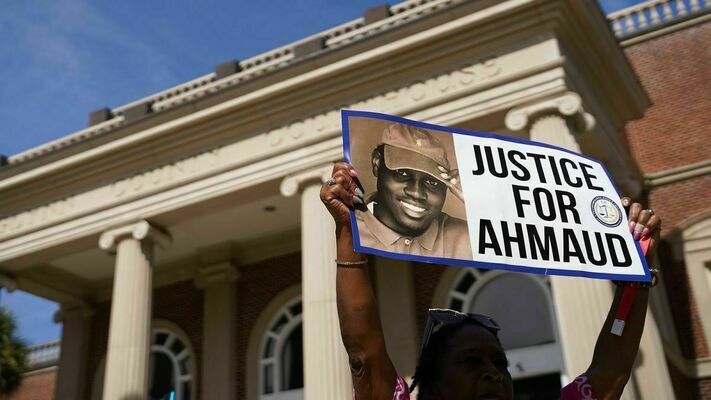 Protestor holds a sign calling for justice for Ahmaud Arbery outside of the Glynn County Courthouse.

A modern-day lynching is what Civil Rights and Freedom Movement leaders are calling the death of Ahmaud Arbery and the trial of three White men accused of his murder.

Black pastors, churches, and communities across the United States have been summoned to Brunswick, GA. by Rev. Al Sharpton, Rev. Jamal Bryant, and Benjamin Crump after statements in court made by Attorney Kevin Gough. Gough, a defense lawyer for one of three White men accused of killing the Black jogger, asked the Georgia judge to limit the number of high-profile Black pastors allowed to attend the proceedings.

Three men, William “Rody” Bryan, Gregory and Travis McMichael — all of whom are White — are accused of hunting down and killing 25-year-old Black jogger, Ahmaud Arbery. The trial began with a 5-minute video of Arbery’s shooting and death.

Eleven Whites and one Black sit on the jury. Judge Timothy Walmsley said he thinks exclusion of Black jurors was racially discriminatory but did nothing to correct it. All jurors must agree on the defendant’s guilt or innocence for conviction or acquittal. The three men are charged with nine felonies including murder and aggravated assault. Ahmaud, who was fitness conscious and a former high school athlete, dreamed of building houses and frequently stopped in to check on construction progress on a house in the Satilla Shores subdivision where he was killed.

Prosecutors have presented a shocking story. After leaving the construction site, Arbery jogged by two armed White men in trucks and a third man operating a video camera. The description in court had the feel of a scene in a movie set. Five minutes of chasing Arbery back and forth in a residential block between two trucks. The chase ends with one defendant, Travis Michael, stepping from the truck with a shotgun pointed at Arbery. A struggle ensued and Arbery was fatally shot. Police, summoned by the killers, did nothing to try to save Arbery’s life as he lay dying on ground.

After 74 days of Black community protests, the video of the confrontation and shooting surfaced and was published widely in national media. Only then were Bryan and the Michaels charged. Gregory Michael is a retired Glyn County Sheriff’s office investigator and court investigator.

In their opening statement, the Defendants’ lawyers said the men thought Arbery may have been guilty of an uncertain crime, maybe burglary of the construction site. Video from the site showed Arbery walking through, looking, but taking nothing. Lawyers claim the men were making a citizen’s arrest, Arbery resisted, and the White men were defending themselves.

“We don’t want any more Black pastors in here,” said Kevin Gough, a defense attorney representing one of the accused killers. Gough asked Judge Timothy Walmsley to limit the number of Black preachers in the court. Rev. Al Sharpton of the National Action Network had been in court the previous day. “My concern is that it’s one thing for the family (of Ahmaud Arbery) to be present but (allowing) high-profile members of the African American community into the courtroom to sit with the family during trial in the presence of the jury, I believe that’s intimidating — and it is an attempt to pressure or influence the jury.

In response to Attorney Gough’s demands, Atty. Barbara Arnwine, president of the Transformative Justice Coalition, is calling on pastors from around the country to attend the trial in Brunswick, GA.

Local pastors across Georgia and Florida and the nation are mobilizing to attend the trial. Besides Jamal Bryant in Atlanta, pastor Jeffrey Dove of St. Paul African Methodist Episcopal Church in Ocala, Fla. and Florida AME Bishop Frank Reid, Jr. are inviting pastors and members to Brunswick. Brunswick, Georgia is close to the Florida line and Jacksonville, Florida, a city with one million people, is the closest big city.

“The Black Church is uniquely positioned to lift a moral voice, moral vision, and expose some of the fundamental contradictions that exist in American public life,” says Rev. Jeffrey Dove of Jacksonville.

Also calling on pastors and church leaders to join the trial on November 18, 11 am. at the Brunswick GA courthouse is Rev. Gregory Moss, a former Charlotte, North Carolina pastor and former executive director of the Lott Carey Missionary Society. “We must stand against this overt, racist attempt to prejudice the jury and further deny and diminish our rights as citizens to attend public proceedings.

Brunswick’s population is home to 16,122 people of which 56 percent are Black. The largest industries are Sea Island Company that markets its beaches and resorts, Southeast Georgia Health System, and Brunswick Cellouse (Georgia Pacific), a polluting paper company that spoils this area’s natural beauty, especially the air and water. Brunswick is the County seat of Glyn County which has a population of 69 percent White, 26 percent Black, and 6 percent Latino.

The courthouse has a small hearing room that accommodate less than forty spectators with an overflow room generally not filled. A large contingent of family and friends gather under tents outside the courthouse.

Ahmaud Abery’s mother and father are present in the courthouse each day flanked by lawyers and sometimes commenting with reporters gathered outside on matters at trial. As details of the evidence unfolds, like the video camera footage from the first officer on the scene, the Arbery family were visibly shaken. Ahmaud was visibly still alive when officers first arrived on the scene.

Among a network of community leaders fighting for conviction is Dana Roberts Beckham, founder and leader of Genoa Martin Friends of Historic Selden Park Association. A recent graduate of College of Coastal Georgia with a BS in psychology and community organizational leadership, Dana tirelessly battles racism and environmental destruction in this sleepy town that mirrors many other towns in America.

“The majority of the Black community is not involved in social justice (struggles) in our city because our town lacks the kind of leadership to raise up warriors (to battle) social injustices …such as environmental racism, medical racism, housing racism, educational racism, mass incarceration, food desserts and other facets of racism,” said Ms. Roberts Beckham.

Rabi Rachael Bergman of Temple Beth Tefilloh in Brunswich, is co-founder Glyn Clergy for Equity, an ecumenical group founded after the Ahmaud Abery killing. The ministerial group has agitated law enforcement and the courts for justice. The group trains clergy to engage in dialogue about racism through its equity dinners. Clegry have been outside the courthouse during hearings. Whites and Blacks gather outside the courthouse daily supporting the many members of the Arbery family.

Rabi Bergman said this case is important. “This case is going to be a referendum on what is acceptable in the South. The case will mark a turning point in history in which a Black man can get a fair trial.”

*Pat Bryant is a longtime journalist who covers events in the Southern United States.

**Reading about Black trauma can have an impact on your mental health. If you or someone you know needs immediate mental health help, text “STRENGTH” to the Crisis Text Line at 741-741 to be connected to a certified crisis counselor.

These additional resources are also available:

Investigators Exonerate Men Convicted in The 19...