Gamecock Great Alaina Coates Isn’t Giving Up Basketball Or Herself 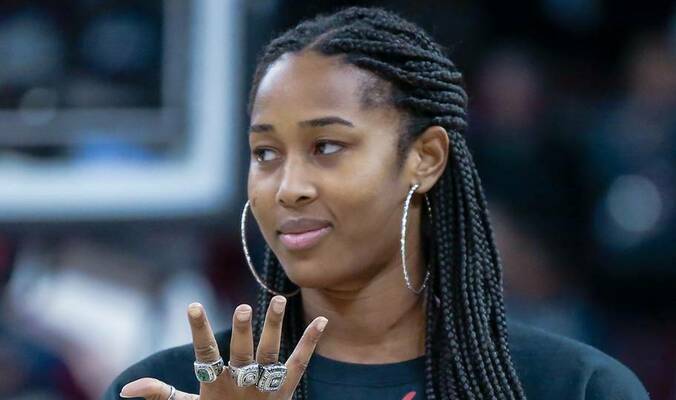 Alaina Coates admires the SEC championship ring she and other members of the 2017 team received.

Alaina Coates wants you to know she will make her comeback.

Coates, who led a record-setting career with South Carolina women’s basketball from 2013-17, has managed a flurry of change since leaving Columbia. Bouncing between four WNBA teams in four years and coping with her father’s sudden death in 2018 has taken a toll on her mental health, but the Gamecock great is moving forward.

Coates isn’t playing basketball this summer. She’s started therapy and is living at home. But she made it clear she will be ready to return to professional basketball soon in an open letter to The Unsealed published Tuesday.

“No matter how discouraged you feel right now, don’t quit,” Coates wrote. “At some point, all of us will have our minds go against us. But these last few months have taught me that there is always one person who can beat your inner demon.”

“Love you big girl!” Staley tweeted. “God’s always had you. May he continue to work in your life.”

Back in 2017, Coates’ senior season with South Carolina was cut short by an ankle injury on her senior night — just before the Gamecocks made their 2017 national championship run. Her recovery meant she couldn’t attend the game.

Coates was drafted No. 2 overall by the Chicago Sky in the 2017 WNBA Draft but missed the entire 2017 season rehabbing her ankle. In March 2018, her father died after suffering cardiac arrest while driving.

Coates made her professional debut with Chicago in May 2018, but the Sky finished 13-21 that year and failed to make the playoffs. She was traded to the Minnesota Lynx in May 2019, waived by the team two months later, and signed with the Atlanta Dream in July. In June 2020, she was signed by the Washington Mystics. The Mystics did not bring her back for this season.

After playing overseas in Israel, Coates began speaking with a therapist and now says her strength and spirit have returned. She wrote that she’s optimistic her mental clarity will translate into basketball success as she prepares to play overseas again, this time in Turkey.

“What I have learned through my own journey is that the same person who created your inner demon is the one person who can beat it,” Coates wrote. “And that’s you.”